Aside from examining the formation of the earliest stars and galaxies in the universe, astronomers are eager to study super-massive black holes believed to occupy the centres of distant galaxies.
NASA’s James Webb Space Telescope, built to give the world a glimpse of the universe as it existed when the first galaxies formed, was launched by rocket early on December 25 from South America’s northeastern coast, opening a new era of astronomy.The revolutionary $9-billion infrared telescope, hailed by NASA as the premier space-science observatory of the next decade, was carried aloft inside the cargo bay of an Ariane5 rocket that blasted off atabout 7.20 a.m. EST (5.50 p.m. IST) from the European Space Agency’s (ESA) launch base in French Guiana.

The flawless Christmas Day launch, with a countdown conducted in French, was carried live on a joint NASA-ESA webcast.

After a 27-minute ride into space, the 14,000-pound instrument was released from the upper stage of the French-built rocket, and should gradually unfurl to nearly the size of a tennis court over the next 13 days as it sails onward on its own.

Live video captured by a camera mounted on the rocket’s upper stage showed the Webb moving gently away high above the Earth as it was jettisoned. Flight controllers confirmed moments later that Webb’s power supply was operational. 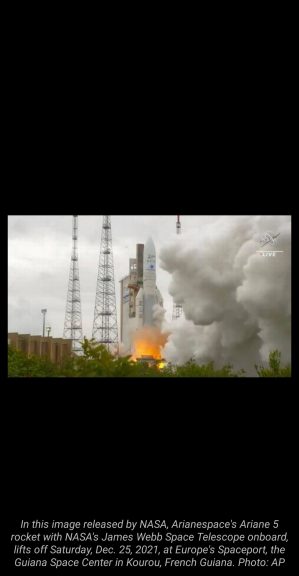 Coasting through space for two more weeks, the Webb telescope will reach its destination in solar orbit about 1.6 million km from Earth — about four times farther away than the moon. And Webb’s special orbital path will keep it in constant alignment with the Earth as the planet and telescope circle the sun in tandem.

By comparison, Webb’s 30-year-old predecessor, the Hubble Space Telescope, orbits the Earth from about 550 km away, passing in and out of the planet’s shadow every 90 minutes.

Named after the man who oversaw NASA through most of its formative decade of the 1960s, Webb is about 100 times more sensitive than Hubble and is expected to transform scientists’ understanding of the universe and our place in it.

Webb mainly will view the cosmos in the infrared spectrum, allowing it to gaze through clouds of gas and dust where stars are being born, while Hubble has operated primarily at optical and ultraviolet wavelengths.

Cosmological history lesson
The new telescope’s primary mirror —consisting of 18 hexagonal segments of gold-coated beryllium metal — also has a much bigger light-collecting area, enabling it to observe objects at greater distances, thus farther back into time, than Hubble or any other telescope.

That, astronomers say, will bring into view a glimpse of the cosmos never previously seen — dating to just 100 million year safter the Big Bang, the theoretical flashpoint that set in motion the expansion of the observable universe an estimated 13.8 billion years ago.
Hubble’s view reached back to roughly 400 million years following the Big Bang, a period just after the very first galaxies — sprawling clusters of stars, gases and other interstellar matter — are believed to have taken shape.

Aside from examining the formation of the earliest stars and galaxies in the universe, astronomers are eager to study super-massive black holes believed to occupy the centres of distant galaxies.

Webb’s instruments also make it ideal to search for evidence of potentially life-supporting atmospheres around scores of newly documented exoplanets — celestial bodies orbiting distant stars — and to observe worlds much closer to home, such as Mars and Saturn’s icy moon Titan.

The telescope is an international collaboration led by NASA in partnership with the European and Canadian space agencies. Northrop Grumman Corp was the primary contractor. The Arianespace launch vehicle is part of the European contribution.

Webb was developed at a cost of $8.8 billion, with operational expenses projected to bring its total price tag to about $9.66 billion, far higher than planned when NASA was previously aiming for a 2011 launch.

Astronomical operation of the telescope, to be managed from the Space Telescope Science Institute in Baltimore, is expected to begin in the summer of 2022, following about six months of alignment and calibration of Webb’s mirrors and instruments.

It is then that NASA expects to release the initial batch of images captured by Webb. Webb is designed to last up to 10 years. 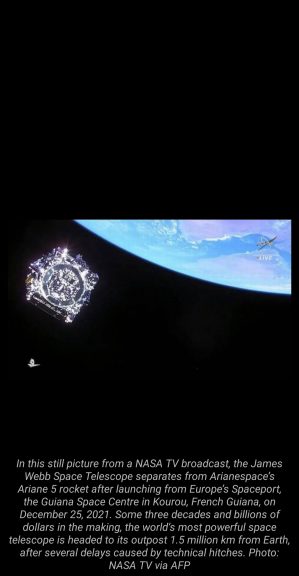 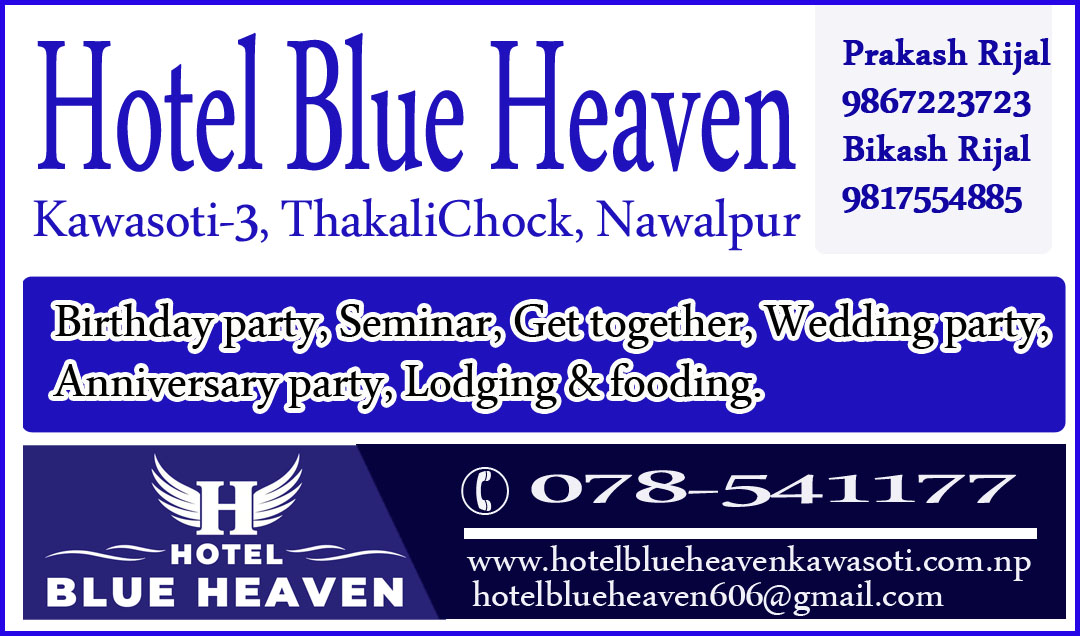